Auburn, Alabama — Buying and eating food in its correct season is a cost-saving way to enjoy the health benefits of  seasonal produce. It also puts money back into the local economy and reduces  environmental impact.

Growing seasons vary around the country. Today’s food system gives the illusion that certain fruits and vegetables are in season year-round. What are the costs and benefits of seasonal produce choices? 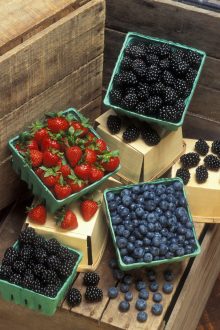 “The main thing about buying produce when it typically isn’t in season for your area, is that produce is shipped in from a greater distance or grown in a greenhouse, says Jessica Kelton, an Alabama Cooperative Extension System regional farm and agribusiness management agent. “Those shipping costs or greenhouse costs increase the cost for the consumer.”

Kelton says, “When it’s possible, buy locally grown seasonal produce. Not only is it likely to be fresher because it hasn’t traveled as far, but it puts dollars back into the local economy.”

Food miles are a growing cause of concern due to the greenhouse gas emissions released through the transportation of our food—and rightly so, as food miles consume a considerable amount of energy, according to ATTRA, a national sustainable agriculture program managed by the National Center for Appropriate Technology (NCAT) and funded by the U.S. Department of Agriculture’s Rural Business-Cooperative Service.

Purchasing food out of season also consumes more energy and emits carbon dioxide into the air, adding to the food system’s carbon footprint.

Helen Jones, a human nutrition, diet and health agent with Alabama Extension, says consuming seasonal produce in its proper season is delicious and better for you.

“Studies have shown that some crops can have up to three times more nutrients when grown in season. Seasonal fruits and vegetables don’t have to endure as much travel, so they don’t lose vital nutrients.”

Better for the environment

ATTRA  says “local food systems reduce food miles, which in turn tend to reduce energy consumption, but there are exceptions. Depending on the mode of transport and load capacity. local transportation systems may not always be as efficient as regional systems.”

What foods are in season and when

Alabama Extension provides a chart of fruits and vegetables for each season. Use this guide to focus your grocery shopping and make better food choices. Stock up on in-season foods to avoid the costs of eating out of season. Alabama Produce Food Guide

If you have questions about seasonal produce in your area, contact your regional Extension agent.